Why Are Knee Injuries So Common in Soccer? 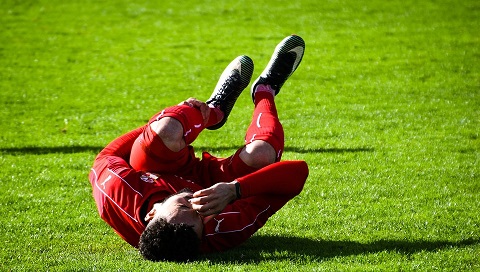 If you’ve played soccer competitively then you’ll know how the sport can put strains on your legs, especially your knees. The most common soccer injuries are sprains, and strains of ligaments and muscles; specifically tears of the anterior cruciate ligament (ACL) and the meniscus. Moreover, the risk of ACL injuries in women is even greater, and females are four to eight times more likely than men to suffer this injury. Being one the most popular sports in the world, it is no wonder that soccer is a major contributor to so many knee injuries.

So why is soccer so potentially terrible for your knees? Well, the rapid pivoting, sudden change of direction, stopping, and decelerating, or even landing incorrectly, are some of the actions which put major stress on the knees. Factor in the condition of the field, types of equipment, and the weather, and you’ll have a more accurate picture of the causes that lead to injury. Artificial turf has also been a contributing factor as it places a greater strain on knees and ankles. As a result, knee pain is quite common for soccer players. As described here by Dr. Coyner overuse injury pain is common among those who play soccer and can develop into Osgood-Schlatter disease in skeletally immature athletes, which is characterized by inflammation of the tendon as it inserts on the knee cap.

On the other hand, more serious injuries like ACL and meniscus tears can bench a player for six months or longer. The ACL originates on the femur and inserts on the tibia, its purpose is to prevent the tibia from moving too far anterior in relation to the femur as well as control the amount the tibia rotates. The ACL, therefore, plays a major role in stabilizing the knee. Partial or complete tear injuries can occur when a player is hit by another player or lands awkwardly from a jump, according to this article on US Youth Soccer. Buckling of the knee is commonly associated with this kind of injury.

How are knee injuries mitigated then? Unfortunately, there is no 100% method of preventing injuries, but they can be mitigated by maintaining proper fitness levels, learning the correct techniques for jumping and landing, improving balance and footwork as well as strengthening the leg muscles. Knee injuries are common in professional soccer due to the intensity of the game, and many players have had to end their careers early because of the aforementioned injuries. At a professional level, players are expected to go all out for long durations of time. Coral reveals that the average English Premier League game is 96:38, with the added time partially due to injuries sustained during the match. Playing consecutively week after week makes picking up a knee injury a big risk for players. At an amateur level of playing, the intensity will be a lot less, but the chance of picking up an injury will increase. This can be attributed to a professional players’ greater skill, conditioning, fitness levels and a better awareness of their bodies and limitations.

Those who play soccer must make sure they do their best to protect their knees, through proper training and rest. Knee injuries are common, but with the right care these injuries can be prevented.